While headed to Yellowstone Park for a vacation, my family stopped at the Lewis and Clark caverns in southern Montana. Wow! What an incredible panorama of rock formations these caves have to offer. If you’re ever driving through the area, I highly recommend taking the tour.

At one point in the tour, our group was 325 feet below the surface of where we entered the caverns. It’s an amazing and long winding trip that ta 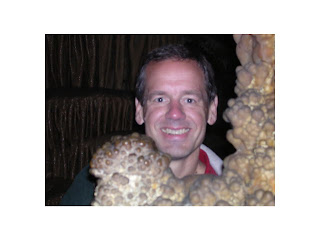 Pinkes one through several runs, cathedral rooms, down beaver alley (a sit down on your bottom and slip down the narrow glistening smooth rock-slide that has been shaped to the angular outline of the human buttocks from much use), to the pristine pool of water, to hundred of stalactites, stalagmites, columns, slow flow water, bacon, water falls and much more.

In one room, as typical with most cave tours, the guide had us turn off all lights and cover all luminescent objects, including the blinking lights on kid’s sneakers. When the room went pitch dark, everyone oohed and awed at how dense the darkness was. You could not see your hand in front of your eyes, it was so pitch black. Then our leader lighted a single candle in an old-fashioned mining lantern, and she told us the story of Ralph Pierny (sp?).

Ralph had been a CCC (civil conservation corp) worker back in the 1930s when the cave was being prepared for tours. Ralph had other plans though, that stepped out of the bounds of his responsibilities. He was going to steal some of the stalactite formations to take back home to Ohio and sell for personal profit.

One Friday, after work was finished for the week, he snuck back into the Cavern alone to loot his booty. Deep in the Caverns, busily about his dishonest deed, the single candle he had brought with him burned out. And there he stood in absolute darkness with no other means of light.

The guide explained that the human mind cannot compute darkness and begins to hallucinate after a period of time. We all tried to imagine what we would do if stuck in that cavern 300 feet below the surface of the ground with absolutely no light.

In the dark, we could not see anything. We didn’t know what direction to turn, where the alley out was located, what rocks to avoid tripping on, what holes in the ground to avoid. We couldn’t do anything. We’d be stuck, maybe forever! And that’s exactly the situation that Ralph found himself.

Three days passed for Ralph, until Monday morning when roll call was taken outside, and the work party realized Ralph was missing. They sent a search party into the cave, and found him alive, a bit dehydrated, but otherwise, quite fine. Ralph confessed his criminal intent and said he never wanted to experience that again. At times he was lying on the floor and thought he was standing up, the darkness was so confusing, he relayed.

I pondered the guide’s statement of “the human mind cannot compute darkness,” for days afterward.

I thought about different kinds of darkness the human mind often faces other than pitch black in a cave, like immorality, greed, and self-centeredness.

How was Ralph so stupid to take only one candle, I wondered? I decided it was because he was blinded by his dishonest intent. And this is true with all crimes. The criminal eventually, if not from the start, makes major errors in judgments and calculation because he is walking in mental blindness to some degree.

I thought about the blindness of dense sensualism–thought so engrossed in physical sensation that it loses touch with Spirit. I considered the blindness of selfishness, hate, anger, rampant consumerism, and materialism, the belief of living in matter. When thought is absorbed into the belief that happiness, life, mind, and substance is in the flesh, it loses touch with reality, and starts floundering around as if in darkness, just like Ralph trying to find his way out of the cave without light. He could not.

We need light to find direction and stay alive, I concluded. We need a shining hope outside of ourselves to survive.

Ralph could not save himself. He needed help.

We need help too. We need God to save us from the darkness of mortality. Christ is the light God sent to deliver us from evil, and Christian Science is the Christ-light shining brilliantly today leading mankind out of the pit of error into the glorious dawn of Truth.

The story of Ralph Pierny has been a powerful teaching tool for our children who heard and experienced the account firsthand on the cavern tour. My wife and I quickly jumped on the opportunity to illustrate the various types of darkness for them to avoid in coming decades as they learn to lead ethical and spiritually progressive lives.

I will not soon forget the saga of Ralph Pierny either!

The error, which says that Soul is in body, Mind is in matter, and good is in evil, must unsay it and cease from such utterances; else God will continue to be hidden from humanity, and mortals will sin without knowing that they are sinning, will lean on matter instead of Spirit, stumble with lameness, drop with drunkenness, consume with disease, — all because of their blindness, their false sense concerning God and man. Mary Baker Eddy

1 thought on “Avoid the blindness of materialism”