Skip to content
How successful are you at giving to others without taking thought for yourself?
While walking the streets of Washington, DC last fall, I traipsed across a bronze medallion in the sidewalk commemorating the life and work of Clara Barton. 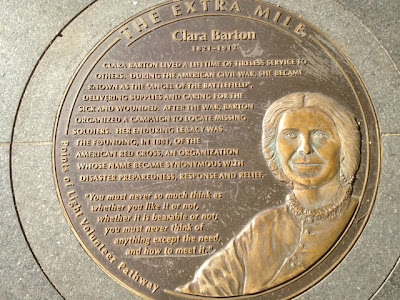 Barton founded the Red Cross. She is renowned for her selfless giving, quick to sacrifice whatever time, energy and resources were needed to help soldiers and victims of war in grave need.
The wording in the picture above states,
“Clara Barton lived a lifetime of tireless service to others. During the American civil war, she became known as the ‘angel of the battlefield’, delivering supplies and caring for the sick and wounded. After the war, Barton organized a campaign to locate missing soldiers. Her enduring legacy was the founding, in 1881, of the American Red Cross, an organization whose name became synonymous with disaster preparedness, response and relief.”
The aid the Red Cross has brought to suffering millions around the world over the last century is legion.
What arrested my attention, though, was the quote attributed to Barton at the bottom of the medallion. It reads,
“You must never so much think as whether you like it or not, whether it is bearable or not; you must never think of anything except the need, and how to meet it.”
These are powerful words, drawn from the deep well of a heart that knows firsthand the rewards and benefits to self and society of selfless giving.
The call to give unselfishly is not an appeal to act blindly, recklessly, or ignorantly. It’s a call to discern “the need,” and willingly jump in to supply it.
Jesus Christ is the ultimate example of selfless giving. He “discerned the need,” of humanity to know love.
He instructed, “Love one another,” and proceeded to live the ultimate love, sacrificing all personal ambition, aims and goals in order to help his fellowman find God. He gave up everything in this world so that we can find everything in heaven.
Are you willing to follow his example?
The reward of finding life in love is yours when you do.
0shares