Skip to content
I was invited to lecture in Den Haag, so Kathy and I packed up our bags and headed to the Netherlands in mid-April.
Since we’ve never been to that part of the world, we added a few days into the trip for sight-seeing, and our first stop was Amsterdam.
Amsterdam is a busy city. 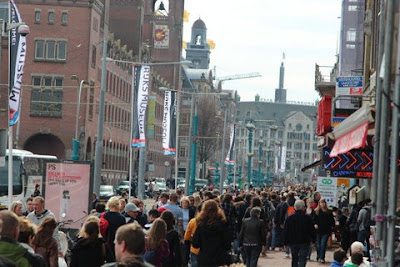 When we walked out of the central train station and headed for the center of town, it felt like we were walking down a busy New York City sidewalk. People everywhere! It was a sunny warm day, so maybe that had something to do with everyone out on the streets. The Netherlands was coming out of a long cold winter.
And what did we find? Canals everywhere! What fun. Bridges, boats, canals and more canals, by the hundreds, are everywhere you walk in the city. Much of the Netherlands is below sea level, so managing water is a major issue for this country.
From what I’ve heard in news reports, Amsterdam has a well-known reputation for liberal laws allowing legal prostitution and activity that goes along with this trade. News reports would mention women posing in window shop displays located on busy city streets, displaying their wares with scantily clad bodies, and so on. And yep, it’s true. It really happens.
I was curious as to what in the mental make-up of the country allowed such a public display of sexual promiscuity. Later that week, a resident I was speaking with wondered out loud if the influence of Calvinism (Calvin had substantial influence in this country) in centuries past with all its “Thou shalt nots…” produced a reactionary effect in the public consciousness causing a pendulum swing to, “It’s okay to do anything.”
Very thought provoking!
It made me think of parents who raise their children on a “Thou shalt not,” basis, always telling them what they cannot do, and not helping them understand why they want to do the right thing. Then, when the child leaves home, they are so sick and tired of hearing all the things they can’t do, that they do a pendulum swing to the opposite extreme, trying out anything and everything, often leading to a self-destructive life-style.
Hmmm…something to think about.
The Netherlands is a beautiful country and filled with beautiful people. No obesity problem here. Residents are fit and trim. The Dutch we met were friendly, happy, and so willing to help. And most of them speak English quite well. A big plus for us!
It was easy to travel in this country, and much to see and experience…
0shares

5 thoughts on “Netherlands, here we come”

Subscribe to receive updates of new postings by email