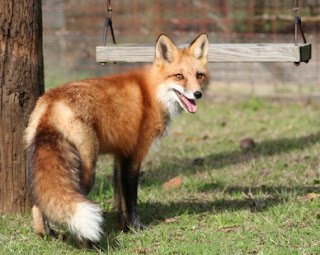 There is a story once told of a man who owned a fox for a pet.
For fun, when feeding his pet fox, he cut a two inch hole in the front door and pushed the fox’s tail out the hole.  He then gave the fox a bowl of food to content himself with.  In the meantime, he walked around to the front to watch the gathering crowd of passersby.
Upon asking what all the interest was, some responded by pointing to the twitching tail of the fox saying, “We are wondering how that fox was able to get thru a hole that small.”
Isn’t it interesting the conclusions we arrive at sometimes…
Mortal existence is like the fox’s tail sticking through the door. The human mind, in its ignorance of spiritual reality, assumes matter is real, that disease is real and evil reigns over good. After all, to the human sense of things, matter and disease appear real and concrete.
“Where did matter come from?” it asks. “What caused this disease?” it queries.
But Jesus Christ had a different point of view. He demonstrated that Spirit is the ultimate reality of all things and disease is not the reality it appears to be.
Starting with the question, “Where did matter come from?” is like asking, “How did the fox get through the hole?” It didn’t. And matter isn’t. From a surface appearance, things are not what they appear to be…
0shares

6 thoughts on “Don’t judge by the appearance”